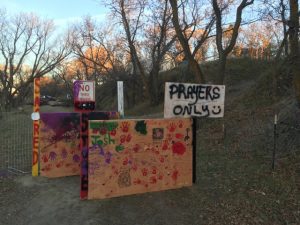 “That’s our way of life here, that we can’t question spirit,” Lakota Chief Arvol Looking Horse said. “So, every day in our tradition we honor that good mind.” Prayer, from sunrise until deep into the night at Oceti Sakowin Camp, infuses the spiral of life, the whirlpool of mystery, in native song, dance, eagle feathers arced through air by careful hands, spontaneous drum circles as if divinely orchestrated into collective heartbeats, including those of tribal elders and mothers and fathers and children, also of allies, such as me, until, finally, there is nothing left to do but cry out for love, tenderness, cooperation, strength, resistance, even to dare the long journey for restorative justice. They often come by way of soft spoken words around the fire circle, a wonderfully quiet inner transformation, but then, sometimes, when in distress, these prayers imbue nonviolent direct action, like getting in the way of construction for the Dakota Access Pipeline (DAPL), referred to appropriately around the camp as “the black snake,” which, if completed, would carry the oil that will inevitably despoil the Missouri River, rendering toxic water for millions, Lakota and otherwise. Perhaps this all-encompassing life-as-prayer—please, dear reader, rightly scarred by organized religion, bare with me—is just what we need to garner both the compassion as well as courage to put enough of our bodies on the line, in front of bulldozers and ditch witches, if necessary, to prevent DAPL from crossing underneath the Missouri River and Ogallala aquifer; yes, and to go further, lead a national as well as global switch from fossil fuels to clean renewable energy sources. Down in your bone marrow, it sure feels that way around this place. Oscar Wilde once said, “Any map that doesn’t have utopia on it is not worth looking at.” Those here at the camp carry this map while stalwartly walking toward our destination.

This culture holds in its epicenter the tribal elders, who, unlike with the white man’s sort of rampant disposable-old-people syndrome, are deeply respected as wisdom leaders. What is more, they live up to this freely granted status by staying keenly awake in discernment as well as highly involved in community affairs, unretired, if you will, one foot unshakably in their ancient spirituality, the other firmly planted in the now. By means of this sacred pilgrimage, passed without interruption from one generation to the next, the elders are continuously modeling what it takes to retain indigenous sustainable ways, harmonious with nature, all the while embracing allies outside their culture as if they were ones of their own. “How we started was by the youth. They said enough is enough,” Chief Looking Horse said, emphasizing how this alert form of cross-generational wisdom leadership is at the core of this encampment’s coming into being to make a stand against DAPL. On observing the reverence all Lakota eschew to the elders, anyone on an active journey of consciousness comes to understand, this camp could only have happened and then thrived with the ongoing prayerful blessings and guidance from the tribal elders.

This most certainly includes the women elders, who are regularly leaders of prayer and have just as much input in decision-making circles at camp as any man. One recent afternoon a group of Lakota youth from South Dakota made a one hundred mile run on foot to Oceti Sakowin Camp. Upon their arrival here, Rachelle Bull Head, a Lakota elder of the Cheyenne River Nation who traveled with the youth runners, put on a multi-colored elaborate ceremonial outfit she called a “penny dress,” adorned with coins that had holes poked through the face of Abraham Lincoln’s likeness, because, she said, “On December 26th in 1862, Lincoln allowed the hanging of the Lakota 38 plus 2.” She did a lovely and vigorous prayer dance at our camp, the seventh time that day she danced her heart out for the youth. All this to inspire them to follow the spiritual leadership of their elders, and refrain from using disrespectful language or becoming overly aggressive when on the front lines of nonviolent civil disobedience actions. “Talk to your children and grandchildren,” Rachelle Bull Head said. “As women, we are powerful.”

When you have kept intact the integral tenets of your spirituality with a strong commitment to not letting it get corrupted by the greed of capitalism on steroids, that ever invasive dystopia, where the elites win and everybody who doesn’t suck up and get in on the take loses (although, let us not forget, when so many are toying with our already severely degraded ecological and climatic environment, all are losers to water poisoned by massive oil leaks and an overheated planet), so be it, here at Oceti Sakowin Camp, which means Seven Council Fires, the coming together again of all seven tribes of the Great Sioux Nation: there is this rare prophetic opportunity to unite all ages in a focused nonviolent movement to stop DAPL, with the added benefit of more fully restoring the free space across their own lands, so often terribly meddled over by white people, to live out loud the seven Lakota guiding principals of Prayer, Respect, Caring and Compassion, Honesty and Truth, Generosity and Caring, Humility, Wisdom. As I write this article and experience camp life, I cannot help but think, “Who knows, with more than a little luck, us palefaces may change our spiritual ways to more resemble the Lakota’s?” In a very real sense, considering the spiritual and thusly physical degradation of our greater society and planet, we must or perish.

Everything here at Oceti Sakowin Camp lets you know that time is of the essence and, yet, time cannot be rushed. Nothing good spiritually comes fast or easy, but slow and with patience. Make less noise and more music. Do the things that matter. Chief Looking Horse is the keeper of the sacred White Calf Pipe, the Sacred Bundle, which is at the spiritual center of the entire Great Sioux Nation. Guided solely by the Great Spirit, he was selected by the Lakota people to keep the White Calf Pipe Sacred Bundle at the age of twelve, and was raised up to step into these large shoes, which he walks in gracefully and with calm forthrightness. There are seven sacred pipes of the Lakota that have been passed on for nineteen generations, the White Calf Pipe Sacred Bundle being the original pipe of the seven. All of them forged from the same rock quarry. The strength of this tradition shone through brightly when Chief Looking Horse said, “How we start our camp here is through prayer, everything comes through Wichoti, which means, ‘Wi,’ the sun, ‘cho,’ the circle of camp, and ‘ti’ the tipi.” In short, it is a community of living prayer.

Every day at 10:00 am and again at 4:00 pm there is a community circle meeting, where ideas are birthed, concerns voiced, and consensus agreement is reached on actions to take. The meeting starts with a prayer and ends with a prayer; if at any time the sacred is veered from during these gatherings, it is quickly gotten back to. Right now the camp is in the process of winterizing, no small task in North Dakota where temperatures of the season drop to lows of 40 and 60 degrees below zero Fahrenheit. Firewood is needed, structures are being built, tipis and yurts are getting dressed out, the entire camp, spread out over a rambling prairie, is resetting itself, coming closer together, tightening up to huddle and keep warm together during the tough months ahead. Many, perhaps most, will move to a more fully winterized camp in another location. Others will stay in the current camp. The decisions, as one can imagine, are myriad, complex, and can make the difference between life and death out here. In these gatherings, Johnny Aseron, the camp’s community meeting facilitator, deftly unfolds before everyone present something that can rightly be called a living prayer. He accomplishes this by practicing ancient Lakota talking circle traditions. In all aspects the spiral of life is respected, while he patiently pans clockwise around the room, allowing each person who has something to share their time to talk. As long as even one person has something to add about a particular subject, at the conclusion of his or her comments, Johnny makes another slow pan across the gathering, until there are no more concerns and a consensus decision is reached. It is beautiful to be a part of, a poem of democracy, far cry from the shambles of bluster and bullying and obfuscation of truth that the U.S.’s so called democracy has fallen to.

Well before and quite a while after these community circle meetings take place, together with all manner of camp work and nonviolent civil disobedience direct action against DAPL that is accomplished, prayer bookends the days. Each morning campers gather alongside the bank for a body of water surrounded by wetlands of the Missouri River, the Great Plains stretching out all the way over to a new sun lifting itself above the horizon. There is a quiet but sure drum, the soft cry of a chant in Lakota language, sacred sage smoke waved over your face by what have become your divinely willful hands, cleansing the spirit. The people here organically form a human cross, with an open aisle down to water’s edge. One by one the men process in a long line through the middle of the cross until arriving at the bank, where in reverence they release sacred tobacco—held in their left hand, closest to the heart—into the river. Songs and sacred sayings, one after the other with a little silence between offerings, gently flow through the air in various faith traditions: Lakota, Jewish, Christian, Buddhist, as well as wonderful unlabeled individual soulful expressions. Water is life you realize again, though, you never really forgot as much. With each drink we take, as Chief Dennis Banks, co-founder of the American Indian Movement reminded us: we would be well advised to say to the water, “Thank you.”
Then you find yourself sometime later and, all the same, almost before you know it, in the embrace of night, surely changed by prior events, your participation in them. But the spirit is not done with you, not in the least. Most every evening I gather round the sacred fire with a few other campers, where I can count on having easy conversation, sprinkled with convivial laughter, about actions taken, pitfalls that presented themselves throughout the now waning day, as well as, oftentimes, bits of wisdom shared earlier between elders, passed on here to the younger ones, and to others, like me, who are neophytes in Lakota ways. It is good magic, indeed, that I find seeping into my very pores, along with the sacred smoke which wafts amidst cedar logs’ warm flames and embers aglow—spiraling upwards in the chilled wind. And this is more than enough to stardust my mind, prepare it for dreams, soon to come, while snuggled in a good sleeping bag inside my tent, that on awaking in the morrow, inevitably will feel more like visions for a better future.

One young man around the campfire with me the other night, volunteered, “I come from the Bible Belt south. Before coming here I didn’t know much about good spirituality.”

Unmistakably, it is unceasing prayer in this place.

← Indigenous People Show All Of Us The Way To Climate Justice M.D. Baer's Conversations and Collaborations →