Indigenous People Show All Of Us The Way To Climate Justice 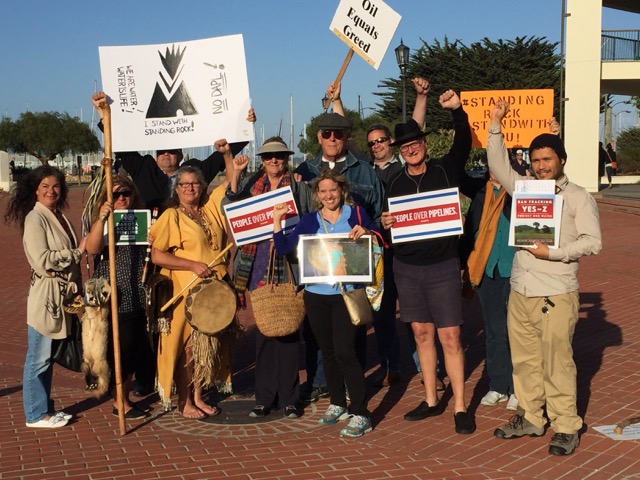 In North Dakota, the Dakota indigenous people and their allies are pushing back stalwartly and nonviolently against the Dakota Access Pipeline or DAPL. They have been brutalized by attack dogs, arrested and put in jail, though they have also caused social justice victories in getting President Obama as well as a Federal Court to postpone the pipeline within twenty miles of a major lake and water source it would otherwise go through. These are temporary injunctions against the pipeline, and in other areas it is going ahead full steam. Much work is still to be done. This is why in Monterey, California on Tuesday, September 13th, I joined in one of over a hundred protests across the country to support the Dakota people and their allies’ efforts to stop this dirty fuel project. We marched through Fisherman’s Wharf to the beat of native drums while chanting for clean water in the Dakota language. It was truly inspiring to be a small part of this protest to protect our water and move away from fossil fuels.

Several months ago I went to South Dakota to stand in solidarity with the Rosebud Lakota Sioux and other indigenous people, as well as their allies, to push back against the Keystone XL pipeline (this pipeline project was ultimately quashed by President Obama). I became convinced these indigenous people, who find the Great Spirit in the land and our ecosystems as much as in people and other of God’s creatures, had the well-being of Mother Earth in their DNA sufficient to put their very lives on the line to nonviolently stop that pipeline and call for switching off of fossil fuels to wind, solar and other clean renewable energy sources. May we all get enough of this sacredness in our DNA to join in their resolve for climate justice.